Home » Latest News » A renewable energy project that started as a way to provide extra income for grape and citrus growers has built its 50th small-scale solar farm in South Australia. 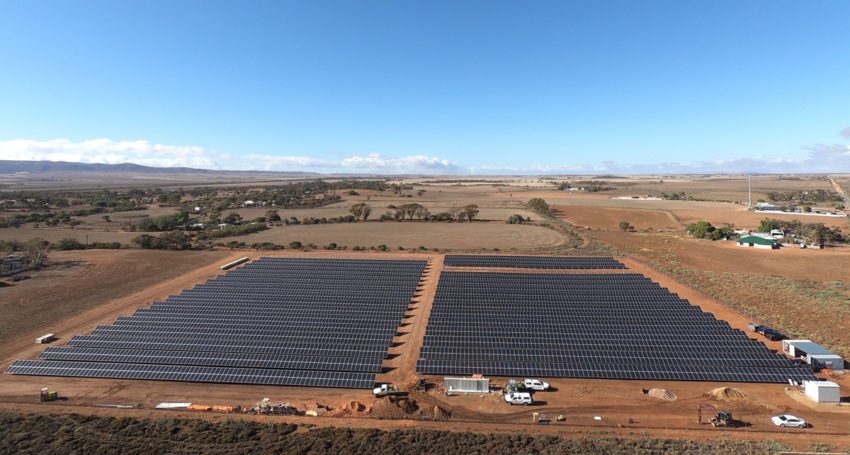 Since then 50 farms have been built up to 1MW in size on sites ranging in area from 4000sq m (1 acre) to 2 hectares (5 acres). About 80 per cent of the farms are in the Riverland but plants have also been built in other parts of the state including Eyre Peninsula and the Mid North.

Yates Electrical Services Managing Director Mark Yates said the farms had delivered between 14 and 19 per cent return on investment for clients by selling the energy and the LGCs (large-scale generation certificates) on the National Electricity Market.

“The majority of the clients are in agribusiness whether it be broad acre, vines or citrus and we’ve had a couple of clients doing it purely for investment purposes utilising self-managed superannuation money and pure equity investors as well,” he said

“The Red Mud side of things is still humming along – we’ve got about 10 sites under construction and that business is going strong.

“We’ve built about 50 plants now since we started a couple of years ago so it’s been really, really busy and we’ve probably done a touch over 20MW now.”

The Riverland is about 250km east of the South Australian capital Adelaide and stretches for 120km along the banks of Australia’s biggest river, the Murray.

Originally a citrus and stone fruit growing region, the Riverland turned to wine grapes in the 1980s and ‘90s and now accounts for more than a quarter of Australia’s annual crush.

Construction of the first Green Gold project – a 2MW farm on 2.5ha (10 acres) near Port Pirie – has just been completed.

Work is expected to begin in late June or early July on 4.95MW farms on 10ha sites in Kadina and Port Pirie.

Yates said Green Gold Energy had an agreement with a major international client to develop a portfolio of small solar farms in South Australia totalling 65MW over the next three years.

He said keeping the individual farms under 5MW meant there was no requirement to register the asset with the Australian Energy Market Operator (AEMO) and it also simplified the application process through electricity distributor SA Power Networks.

“There are going to be projects popping up all over the state. We’ve got a licence so at this point in time we’re going to be the retailer for their sites so we take a margin on the energy they generate,” Yates said.

“We’ve got our supply chain set up so effectively we just arrange the shipment direct from the factory overseas and bring it in to the Adelaide port. Then we use local freight companies to take the containers to each site. – each 25 acre site is about 50 containers.”

A growing team of about 40 electricians, apprentices, trade assistants and office staff have been driving the Red Mud and Green Gold projects.

Yates said the concept of solar farming and people’s acceptance of it had become a lot more mainstream since he first had the idea for the Red Mud Green Energy project in 2015.

“The farming we are getting into has progressed a long way since we started, people are becoming a lot more comfortable and are starting to understand the concept of solar farming whereas a few years ago it was a bit of a pie in the sky idea,” he said.

“But now we’ve demonstrated the viability of it, it just makes it a simple business decision for an investor or a landowner to take up an offering of a solar farm and add it to their existing farming or investment portfolio.”