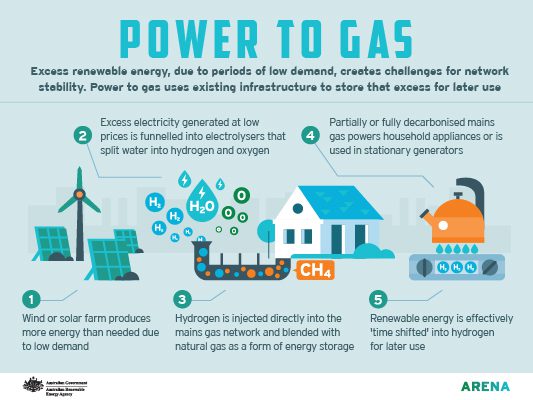 The Australian Renewable Energy Agency (ARENA) has announced a $20 million funding round for early stage research and development into hydrogen to propel innovation in exporting renewable energy.
The funding round is the first time ARENA has sought applications from the research sector and organisations involved in the hydrogen energy creation and supply chain.
Hydrogen – or carriers, like ammonia – are potentially a way for Australia to export  renewable energy. Electrical energy can readily be converted into hydrogen via electrolysis.
Hydrogen production, conversion to a carrier for transport, storage or export, and transformation into energy at point-of-use are all stages of the supply chain that have significant scope for cost reductions on hydrogen production.
In September, ARENA ran a Request for Information (RFI) and received 45 responses from a range of organisations and individuals with information on the renewable production of hydrogen, hydrogen fuel carriers and supply chains in Australia that make use of a carrier material to transport renewable fuel.
ARENA Chief Executive Officer Ivor Frischknecht said this funding round follows the response to our RFI which showed the potential for hydrogen in the global market.
“Exporting renewable energy is one of ARENA’s priorities for investment and this RFI illustrates there is great potential.
“Australia exports approximately three quarters of the energy it produces, in the form of coal and gas. Having some of the best solar and wind power resources in the world, Australia could become a superpower in exports of renewable energy, globally, leveraging existing relationships and growing global  low carbon energy demand in countries such as Japan, South Korea and China.
“Hydrogen is set to play a much larger role in the renewable energy space not only in Australia, but globally as the world moves to a low carbon economy. The potential for hydrogen to be a carrier of renewable energy is substantial, which is why ARENA will be looking to fund projects from the production of hydrogen all the way to transporting and end-use.
“The capability to supply renewable hydrogen at a competitive price is likely to lead to investment throughout the rest of the supply chain, including dedicated renewables for export.” Mr Frischknecht said.
Applications will be open from 20 December 2017 until 5pm AEDST 28 February 2018.
For further information on Hydrogen R&D funding round and to apply, visit https://arena.gov.au/funding/hydrogen/
TagsAustralia hydrogen renewable energy supply