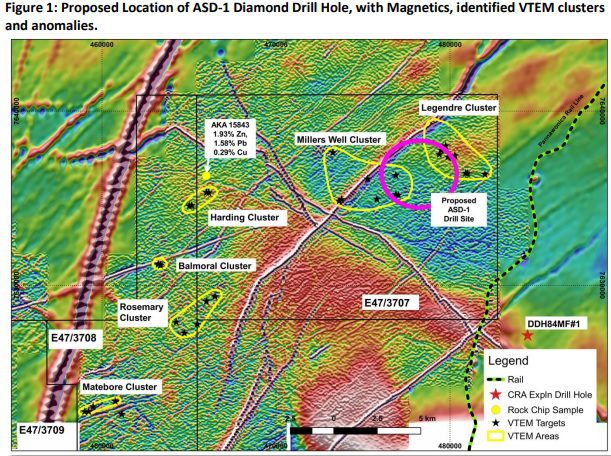 Artemis Resources Limited (“Artemis” or “the Company”) (ASX: ARV) is pleased to announce that it finalised all of the necessary Native Title Agreements over E47/3707, E47/3708 and E47/3709 (the Balmoral tenement package) covering a total of 599km2 and that the WA Department of Mines, Industry, Regulations and Safety (DMIRS) has
now granted all of these tenements. These tenements are located about 50 km south of Artemis’s Radio Hill Mine in the Karratha Region of Western Australia.

Artemis plans to drill a super-deep +3,300m diamond drill hole (ASD-1) on E47/370 . A Programme of Works (POW) had been submitted to the DMIRS to drill ASD-1 and Artemis plans to commence drilling the moment the POW is approved.

CSIRO Scope:
Artemis will be working with the CSIRO on ASD-1. CSIRO will focus on characterising the drill core obtained from the deep hole through the Pilbara stratigraphy. They propose to use up-to-date geochemical and geophysical methods to provide stratigraphic and petrophysical constraints on the Neoarchean and Mesoarchean sequences and study important target horizons for Artemis. This will be the first major project to take advantage of CSIRO’s Drill Core Lab facility in Perth. The proposed research will examine the stratigraphy of the drill core using XRF-based chemistry and include focused studies of Artemis’ key target horizons.

Hole Co-Funding:
Artemis has budgeted for the drilling of ASD-1 and has already received third-party interest in cofunding this hole and Artemis is considering this scenario. Importantly, now that the Balmoral tenement package has been granted, Artemis will be applying for a co-funded Exploration Drilling Program, which is a flagship program of the Exploration Incentive Scheme (EIS), provided by the West Australian Government. EIS is a competitive program, open for applications twice a year, which offers up to a 50 per cent refund for innovative exploration drilling projects, capped at specific amounts. If successful, the EIS could provide up to $200,000 in funding for this single super-deep ASD-1 drill hole.

Background on the Balmoral Target Areas:
On the Balmoral tenement package, Artemis have multiple diamondiferous dykes/pipes, such as Blacktop 1 and 24
, which have come up from the lower mantle below the earth’s crust, the presence of a significant magnetic high feature, crustal breaks interpreted to be faults and dykes, 31 VTEM anomalies for base metals and rock chip assays3 and geochemical anomalies showing the presence of Cobalt, Nickel, Copper, Zinc, Lead and gold4, at surface, proximal to the proposed ASD-1 site.

Regionally, within Artemis’s extensive tenement package, there are pervasive intrusions throughout the entire area such as Munni Munni, Radio Hill and Mt Sholl, with newly identified intrusions at Silica Hills and Purdy’s Reward, which confirms mineralisation associated with intrusions.

VTEM Targets
ASD-1 will be drilled in the area where Fox Resources Limited completed a VTEM survey that resulted in the discovery of six new clusters of base metal targets: LEGENDRE, MILLERS WELL, HARDING, BALMORAL, ROSEMARY and MATEBORE1 and 5. Each of the six clusters identified contain between two and eleven base metal targets, totalling 31 targets overall. Fox Resources also returned, from very limited exploration, a surface rock chip sample grading 1.93% zinc, 1.58% lead and 0.29% copper near the Harding cluster2.

Russel Mortimer from Southern Geoscience Consultants has reviewed all the geophysical data that was collated and is contained within this release and confirms that there has been no material change.

Gold Target
11km to the south-east of the proposed ASD-1 hole, CRA Exploration Pty Ltd drilled a 2,269.95 metre diamond drill hole DDH84MF#1 in 1984/85 and intersected 0.5 metres grading 10.67 g/t Au from 1,756m1.  Artemis has inspected the core from this drill hole at the GSWA Core Library, and believes the hole needs to be drilled deeper.

Diamond Targets
In addition, ASD-1 is located ~20km north-east from the BlackTop Kimberlite discoveries proximal to the Matebore Cluster within the Balmoral tenement package3 . The Blacktop Kimberlite discoveries, which were assessed by the DeBeers/Tawana Resources NL JV (“JV”) in 2006/7, recovering a total of 2,320 diamonds, weighing 163.89 carats were recovered from a bulk sampling programme of approximately 6,000 tonnes2 in 2006/7. The majority of the stones were white dodecahedrons, with the largest stone weighing 1.41 carats.