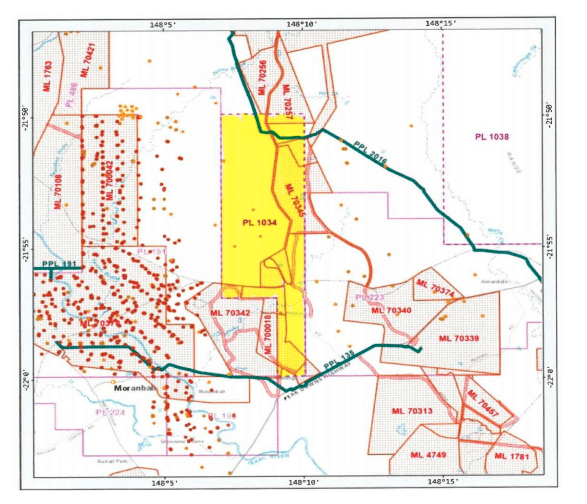 Blue Energy Limited (ASX: “BLU”) is pleased to announce that it has executed a non-binding Memorandum of Understanding (MOU) with Stanmore Coal Limited (ASX: “SMR”) to develop a detailed agreement for the capture, processing and marketing of mine gas that would otherwise be a waste product from the proposed Isaac Plains Underground Coal Mine project in the North Bowen Basin where it overlaps with Blue’s ATP814P tenement in the North Bowen Basin of Central Queensland (see figure1) .

The capture and use of mine methane will mitigate venting and flaring of future fugitive gas emissions from the mine, and will not only have a positive impact on emission targets for the coal sector but also lower the risk of underground gas release in the mine and improve the mine safety profile. It will increase the marketable volume of gas contained in the underdeveloped North Bowen Basin.

Blue Energy’s Managing Director Mr John Phillips commented that “the level of cooperation between Blue and Stanmore to rapidly agree a course of action on jointly dealing with the fugitive emissions and turning an otherwise waste product into a potentially valuable product for Stanmore, Blue and Queensland Treasury, augured well for the joint development of the coal and gas resources in the respective tenements. It will also assist in lowering greenhouse gas emissions from both the coal and gas industries and contribute to Australia meeting its Paris targets.”

This MOU paves the way for further such agreements by Blue Energy with other coal companies in the Bowen Basin as the Qld Government has committed $5 million on a feasibility study for a gas pipeline between Moranbah and the East Coast market, designed to transport gas from the Bowen Basin together with fugitive methane captured from coal mines along the proposed pipeline route. The agreement between Blue and Stanmore clearly highlights the mutual Environmental, Social and Governance (ESG) benefits gained by this standard cross industry cooperation.

Blue’s PLA 1034 contains 216 PJ of 3P reserves plus 186 PJ of Contingent Resource which is being marketed for potential domestic gas buyers in both the Townsville and the southern gas markets.

The MOU contemplates pre-mining gas drainage from Stanmore’s ML 700017; 700019 and 70342, conditioned to sales gas specifications and then sold into the future domestic gas contracts Blue will execute with domestic gas customers, thus extracting value for Stanmore, value for Blue, royalties for the Queensland Treasury and assisting in reducing green house gas emissions levels for the coal industry and reducing the risks associated with gas generated during underground mining operations. It marks a level of cooperation between two industries which are under constant scrutiny for their respective levels of fugitive emissions, and which can be replicated between other resource companies where mutual environmental and financial benefits can be identified.