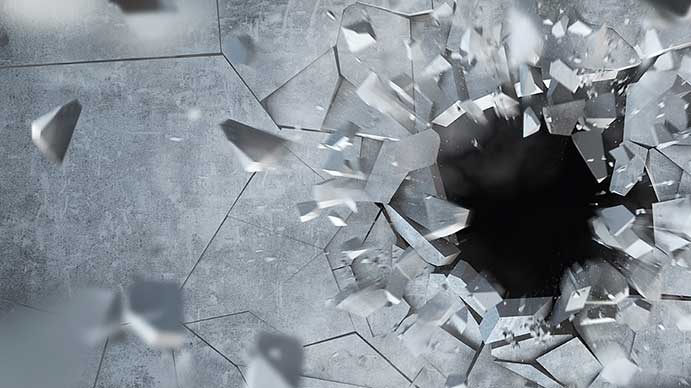 In August 2014, Dr Geoff Brent and his research team were awarded the 2014 CEEC Medal by the Coalition for Eco-Efficient Comminution (CEEC) for groundbreaking research into a novel method of Ultra-High Intensity Blasting to improve mine productivity.

Once mined, ores must be crushed and 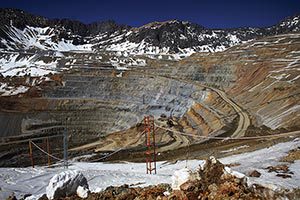 ground into small fragments in a mill before the mineral can be extracted and used in the modern world. This process of crushing and grinding ore is called comminution and typically consumes the greatest proportion of energy in the mining process.

An innovative new blasting technique has been developed by a team of researchers which has already demonstrated its potential to significantly enhance mill throughput while saving costs at mine sites.

The new Ultra High Intensity Blasting (UHIB) process has been described as a ‘game changer’ because it applies chemical energy to assist the comminution process in ways previously thought to be impossible.

With more effective blasting, ore is reduced into smaller particles, or fragments, before the load, haul, crushing and milling stages which are more costly and consume more energy.

By focusing on fragmentation through effective blasting, the milling operation stands to benefit from increased throughput, reduced production costs, potential reduction in capital costs, lower greenhouse gas emissions per tonne and improved social licence to operate. The financial savings alone can be tens of millions of dollars annually.

THE COALITION FOR ECO-EFFICIENT COMMINUTION (CEEC)

The high cost of comminution has such serious implications that in 2011 a visionary group of mining industry leaders set up a high level think tank called the Coalition for Eco-Efficient Comminution (CEEC) to identify and promote more efficient comminution practices.

CEEC’s mission is to raise awareness of research findings, alternative comminution strategies and installed outcomes to accelerate technology transfer of improved comminution practices aimed at lowering processing costs and raising shareholder value. CEEC recognises that even small gains will accelerate the industry’s performance in this area.

At a workshop in 2012, a cross-section of senior mining industry experts developed the CEEC Roadmap to eco-efficient comminution strategies for industry use. Among the recommendations contained in the CEEC Roadmap are ‘mine to mill’ modelling studies and the use of more intelligent blasting to optimise plant feed size distribution.

The Coalition for Eco-Efficient Comminution (CEEC) awarded its 2014 CEEC Medal to Dr Geoff Brent and the Orica research team who developed the UHIB technique, recognising it as a breakthrough advance in mineral processing.

Dr Brent and his colleagues, Dr Peter Dare-Bryan, Stuart Hawke and Michael Rothery, describe the UHIB technique as a new paradigm in mining because it has the potential to increase mine production and profitability while reducing energy consumption and greenhouse gas emissions.

“The use of electricity to mill ore is usually the largest consumer of energy on a mine site and ore comminution constitutes a significant percentage of electricity consumed worldwide,” Orica CEO and managing director Ian Smith said of the technique.

“Independent modelling has indicated that increasing the explosive energy by several fold can lead to increases in mill circuit throughput in the order of 25 to 40 per cent and savings of tens of millions of dollars annually.”

THE CHALLENGE THAT OUR INDUSTRY MUST ADDRESS

As ore bodies of the highest grade are mined and exhausted around the globe, the average grades of ores are falling and processing costs are rising. The implications for global energy use are significant. According to the latest estimates, comminution consumes at least three per cent of the total amount of power generated in the world. That’s enough to power the whole of Germany.

For mine managers, comminution has important consequences because it accounts for approximately 50 per cent of the energy used at the mine site and therefore a significant proportion of the mining and processing costs.

Studies also show that most of the energy used in comminution is lost to heat, noise and mechanical losses.

A CLOSER LOOK AT UHIB

Researchers and blast engineers have long recognised that improving rock fragmentation during blasting can deliver substantial gains in the productivity of excavators and the downstream crushing and grinding processes. Many industry ‘mine to mill’ studies have identified that such gains could be achieved through increased blast energy, or powder factors.

In essence, blasting can be considered the first step in comminution.

Over a number of years, Orica worked closely with industry partners including the Australian Mineral Science Research Institute (AMSRI). Modelling by the University of Queensland showed that theoretically if explosive energy was increased beyond common accepted practice by 4-plus times then a step change in mill productivity and power reduction was possible.

The limiting factor however has been that conventional blasting techniques have not been able to control the rock movement created from significantly higher energies – thus the industry has been limited by safety and environmental issues such as flyrock, unacceptable vibration, airblast and wall damage.

Dr Brent explained that with UHIB, an upper layer is blasted first using conventional powder factors and the broken rock is allowed to fall to rest before the lower layer is then initiated with ultra-high powder factors. 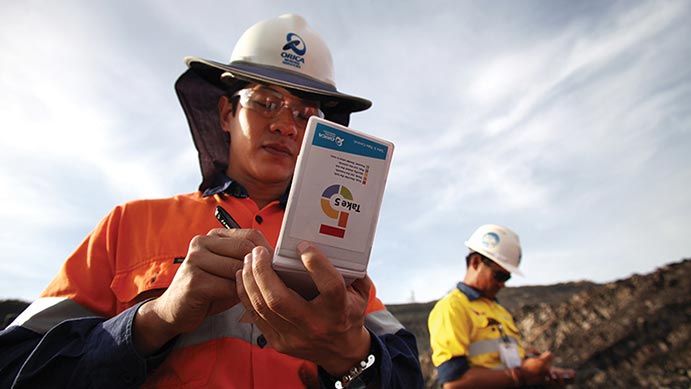 “In effect, the broken rock from the upper layer provides an effective buffer or blanket to contain the energy in the lower layer,” Dr Brent said.

“This buffer avoids flyrock while allowing us to use powder factors in the lower layer that are up to five times higher than those used in conventional blasting, delivering much more intense fragmentation of the ore.

“Meanwhile, independent studies have found that increasing these powder factors in the range of 2 to 5kg per cubic metre of rock can produce much finer rock fragmentation and increase mill throughput by 20 to 40 per cent.”

Dr Brent added that blast modelling and field trials had also shown that control of surface ejection and vibration levels were better with the UHIB method.

“These results are quite remarkable, given the large increases in explosive energy, and reveal that highwall damage as well as vibration and potential damage to key mine infrastructure can be safely controlled when using this method,” Dr Brent said. 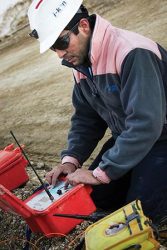 Over the past four years, Orica has been trialling UHIB at copper mines in Latin America, working closely with mine operations.

“The trials have shown that blasthole patterns as tight as 4m by 4m, with hole diameters of 250 – 300mm can be drilled, loaded and fired successfully, and no explosive or initiator malfunctions have been observed,” Dr Brent said.

“They have also shown that UHIB blasts can control flyrock and vibration better than conventional blasting methods. The early results from the field trials had also indicated that rock fragmentation from UHIB was finer.”

For example, a fragmentation vision system installed at a mine’s SAG mill feed recorded a seven percentage point increase in the size fraction under 25mm entering the mill from the UHIB trial section. Another series of full scale production blasts at a mine in Central America showed increases of 10 to 15 percentage points in the size fraction under 50mm.

Dr Brent said the implications of UHIB for mine productivity and our environment were significant.

“There’s a worldwide trend to decreasing ore grades, so UHIB is particularly useful in complex and lower grade ore bodies because it may elevate them to become practical and economically viable to extract,” he said.

“The environmental benefits stem from the fact that emissions in open cut mines from diesel and electricity are typically 100 times greater than the emissions from explosives.

“Independent modelling has revealed that our new UHIB method has the potential to reduce overall energy consumption and cut CO2 emissions caused by grinding by up to 30 per cent.

“This highlights the potential that UHIB offers for an exciting new era in blasting.

“By using far more explosive energy safely and with control, this new technology can enhance mine productivity and reduce overall energy consumption and greenhouse gas emissions, improving the sustainability of mining well into the future.”

UHIB is being introduced progressively at a number of mine sites around the globe.

The new technology is widely applicable across mining sectors, including gold as well as base metals such as copper, lead, zinc and certain types of iron ore.

Mr Boyce headed up the Mining Applications team who developed the technique.

“It is most applicable in regions where energy is expensive and at mines where the strength of the ore has been underestimated and milling capacity is constrained,” Mr Boyce said.

Mr Boyce said he and his colleagues were proud to receive the CEEC Medal in recognition of the hard work that had gone into developing UHIB Technique over the past seven years.

“The method is easily applied, but uses highly advanced technology which brings about a significant step change for the mining industry, particularly at this stage in the metal price cycle when we need to do more with less,” he said. 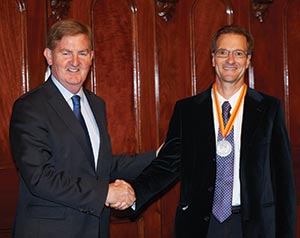 Dr Geoff Brent receives the 2014 CEEC Medal from the Hon Peter Ryan Deputy Premier, Minister for Regional and Rural Development, Victoria whilst at the International Mining and Resources Conference.

What the future of mining holds in outerspace
Comment