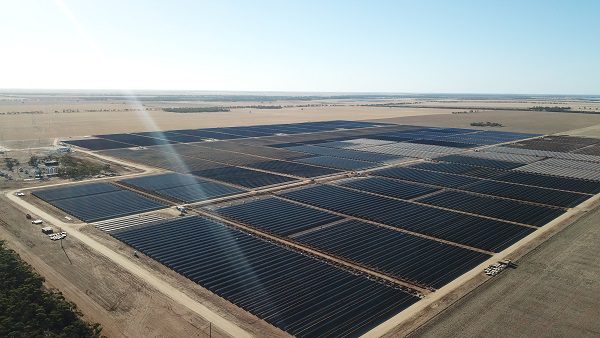 Sydney, Australia. Australian renewable energy company, Wirsol Energy’s Gannawarra Solar Farm in North-West Victoria is connected to the grid and is energised and is proceeding through the commissioning process. The Solar Farm was developed by, and is owned in conjunction with Edify Energy who have also managed its construction.

The Gannawarra Solar Farm is a 60 Megawatt project and represents the first large-scale solar farm to be constructed and grid connected in Victoria. The commissioning process has commenced and will see the project ramp up over a period of time culminating in full production providing solar power to approximately 18,100 Victorian households. The solar farm is connected on site to Powercor’s 66kV distribution line between Swan Hill and Kerang, providing easy access to Victoria’s power grid.

As announced recently by Wirsol Energy, the solar farm, which is spread over 132 hectares, is to be integrated with the Gannawarra Energy Storage System – a 25MW / 50MWh Tesla Powerpack battery – developed by Edify Energy and owned jointly by Wirsol Energy and Edify Energy. Once completed, which is currently scheduled before Summer 2018, the combined solar and storage facility will be one of the largest in the world, enhancing the reliability of the grid in North-West Victoria, and helping underpin future economic growth.

Mark Hogan, Managing Director of WIRSOL Energy said: “The Gannawarra solar farm is in every respect a world leading project and is testament to the future role of solar in enhancing energy supply across Australia.”

“We are now connected to the grid and once through commissioning and in full production 18,100 Victorian households will be drawing solar power. The next step is combining the Gannawarra Energy Storage System powered by a Tesla Powerpack battery to the solar farm, which will set a new benchmark for solar projects in this country. The benefits of these types of projects will resonate with Australian consumers and the broader economy for many years.”