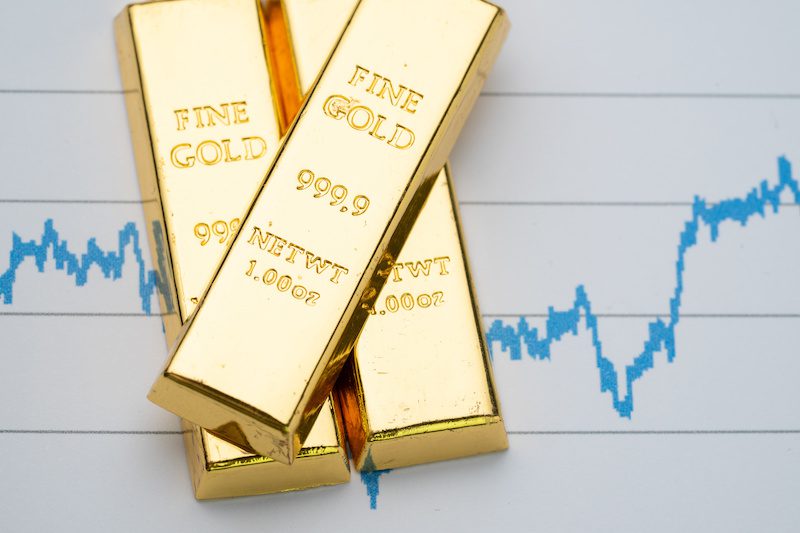 Gold prices have surged to a near six-year high overnight after the US Federal Reserve bank signalled it was ready to cut interest rates as early as next month to boost growth, triggering a sharp fall in the US dollar.

The growth in uncertainty in global market conditions is believed to have spurred on the price increases with a statement from the US Federal Reserve Bank triggering further uncertainty.

The Fed in a statement this week said that information received since the Federal Open Market Committee met in May indicated that the US labour market had remained strong and that economic activity is rising at a moderate rate.

It said that job gains in the US have been solid, on average, in recent months, and the unemployment rate has remained low.

‘Although the growth of household spending appears to have picked up from earlier in the year, indicators of business fixed investment have been soft. On a 12-month basis, overall inflation and inflation for items other than food and energy are running below 2 percent. Market-based measures of inflation compensation have declined; survey-based measures of longer-term inflation expectations are little changed.’

Ryan Giannotto, Director of Research at GraniteShares said  “Expectations were very high for the Fed and the market was forecasting this. But the real risk was that it would not satiate investors’ demand for dovishness.” Lower interest rates decrease the opportunity cost of holding non-yielding bullion and weigh on the US dollar, making gold cheaper for investors holding other currencies.

Gold in Australian dollars at an all-time high.

Local miners are expected to benefit from the falling Australian dollar given incurred costs of operation are mainly in AUD whereas they sell in USD. Profit margins in gold producers are likely to follow the increase in price.

According to IBISWorld, the price of Australian gold has increased in recent months due to several beneficial trends. Increased gold purchases by central banks has been one of the trends exerting upward pressure on prices.

“In 2018, governments added 651.5 tonnes of gold to their coffers, representing a 74% increase from the previous year and the highest rate of accumulation since 1971. This is because gold helps foreign banks diversify their foreign-exchange assets, such as US dollars, during times of heightened political instability. We expect central bank gold purchases to increase to over 700 tonnes in 2019-20,” said Mr Aravanis.

Interest rate cuts in the United States and in Australia have also supported the gold price. According to IBISWorld, interest paid on bank deposits represents an opportunity cost for investors who hold gold. As interest rates have been cut, the relative attractiveness of gold as an asset has improved.

Over the next five years, IBISWorld anticipates both rising demand and declining supply to also support the price of gold.

“Demand for gold jewellery is expected to rise over the next five years, due to the middle class expanding in India, China, and South-East Asia. At the same time, global gold production is expected to continue declining from a peak in 2018 due to aging mines depleting in Russia, South Africa, Mexico and Australia,” said Mr Aravanis.