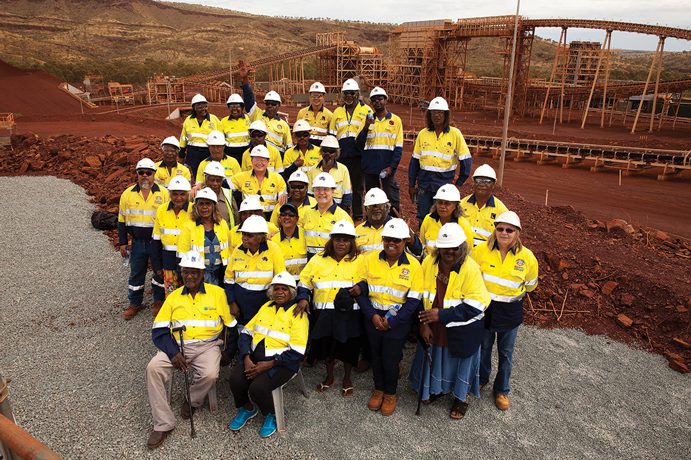 Desmond Mippy knows better than most people the power of being offered a hand up instead of a hand out writes Byron Vale. Desmond works for Fortescue Metals Group on a team maintaining the surface miners at the company’s Christmas Creek iron ore mine in the Pilbara, north-west Western Australia.

He is one of the 1,100 Aboriginal employees who make up 12 percent of the Fortescue family. He is also one of the many successful graduates of Fortescue’s innovative Vocational Training and Employment Centres (VTECs).

Mippy entered the VTEC program after completing a four-year jail term. A year before he was imprisoned, he had walked out on his partner and 10 children while battling his demons.

“Before I did the VTEC program I’d not long come out of prison, I was in prison for four years, and now I’ve got a good job, and it’s good to support my family and be a role model,” he tells the ABC.

“About 12 months before I went to prison I walked out of the house, I didn’t want life to be the way it was and I started to make changes and I didn’t give up. 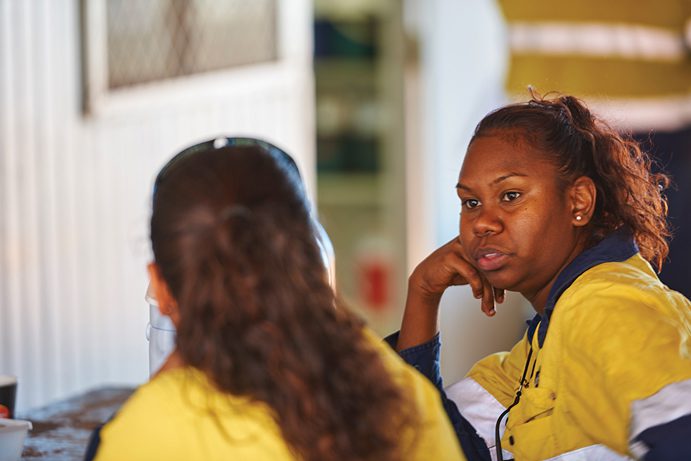 Mippy’s journey is testament to the Fortescue philosophy that the best way to change lives is through employment. The company started by Andrew Forrest around his kitchen table has been consistent: Aboriginal people are best served by being offered, ‘a hand up not a hand out’. This philosophy has been brought to life in many ways by the company, including through its VTEC program, which is regarded as setting new standards in ending Aboriginal disadvantage.

“I am proud of the company that I founded, proud of the employment opportunities that it has created, proud of the wealth it is creating for Australians and especially proud that my company runs training programs for Aboriginal people which train them to be job-ready and guarantees a job once they successfully complete that course,” says Fortescue founder Andrew Forrest.

“We didn’t invent employer-directed job-specific training, and we certainly haven’t perfected it. However we have unleashed the power of training for the most disadvantaged and delight in watching them flourish in their new careers.” 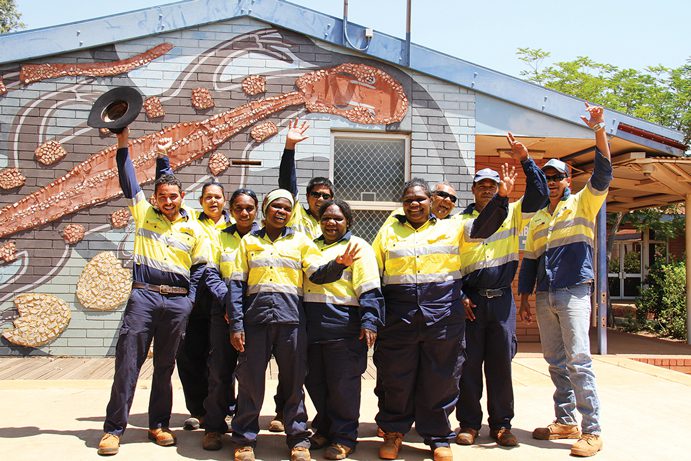 The first VTEC was established in South Hedland in 2006 followed by Roebourne VTEC in 2010. Both centres are operated in partnership with the local training provider, the Pilbara Institute. Students start with a sixweek training program in South Hedland or Roebourne, followed by two weeks of onsite, job-specific training. The VTEC support model extends beyond the traditional teacherstudent relationship, with Aboriginal people enrolled in Fortescue’s VTEC program given assistance in many other areas, including accommodation, literacy programs, help getting a driver’s licence and health and dietary services.

“Fortescue’s rate of retention for Aboriginal employees was 85 percent during Financial Year 2014, and the company is targeting a 90 percent retention rate over the next two years.”

The program has been extended to Fitzroy Crossing in the Kimberley through a partnership with the Fitzroy Valley Men’s Shed and contracting partner Downer EDI. To enable local Pilbara Aboriginal people to work at remote mine sites, the company operates a regional fly-in-fly-out service from Port Hedland, Roebourne and Fitzroy Crossing. 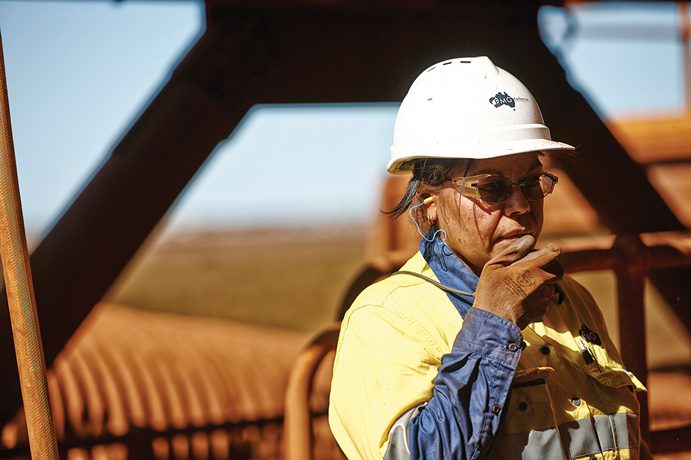 Fortescue’s sites have dedicated teams who work towards the successful transition of Aboriginal employees into the workforce and to promote sustainable long-term employment. In 2015, Fortescue will roll out a new support program for VTEC graduates at its Solomon and Christmas Creek mines that will focus on personal development and addressing barriers identified during pre-employment training.

Manager VTEC Development, Damien Ardagh, says Fortescue realised very early in its existence that a new and different approach was needed to achieve effective, sustainable employment and well-being in the communities in which the company operated.

“Before VTEC a lot of Aboriginal people were stuck in a cycle of training for the sake of training. They would graduate from training courses but have no job to go to so they were back at square one,” says Ardagh.

“At Fortescue, we believed there was a better way and that better way involved starting with a guaranteed job and working backwards through the training and support process. The end result was a program that incentivised students because there was a real job at the end as well as supporting the individual and their specific issues.

“Once we have addressed the barriers that get in the way of training, such as not having a driver’s licence or not having stable accommodation, outstanding police fines or health problems, we can begin addressing their training needs, without addressing these barriers their job would have been impacted.”

Bronson Maher, a recent VTEC graduate, says the guaranteed employment will change his life by offering stability for himself and his family and the opportunity for a better standard of living.

“In the past I’ve done a lot of training courses but none of them had the opportunity to finish with a job, but with VTEC it was on the job training, plus a follow up position,” says Maher.

“…a lot of Aboriginal people were stuck in a cycle of training for the sake of training. They would graduate from training courses but have no job to go to so they were back at square one.”

“I’ve told people that I know to come down to VTEC and register because there’s lots of benefits and opportunities in the company.”

Mother-of-five Vivian Trigwell is a Yinjibarndi woman from Roebourne who graduated from VTEC in 2012 and is a Civil and Infrastructure Crew Operator at Christmas Creek. Before joining Fortescue she was a full-time mother and worked customer service jobs.

“My favourite part of the course was getting to meet a whole heap of my family, having all the support, knowing that there was going to be a future out of it and achieving goals,” she says.

“The advice I’d give to someone who wanted to enrol in this course is, ‘just do it’, because it’s life-changing, it’s emotional, it’s fun, it’s sad – it’s something that you need to do.”

Trigwell has taken advantage of her role to win a scholarship for her daughter Nikki to study and board at the prestigious Perth College through Fortescue’s FIVE STAR secondary scholarship scheme. The scholarship will support Nikki for the duration of her secondary education.

NATIONWIDE SUCCESS
The success of the VTEC program has not gone unnoticed. Following strong advocacy from Fortescue and GenerationOne, the organisation committed to ending Aboriginal disparity within this generation, the Federal Government has adopted the VTEC model and committed A$45 million to fund the establishment of VTECs across Australia.

Alan Tudge, the Parliamentary Secretary to Australian Prime Minister Tony Abbott, visited Fortescue’s operations and was inspired by the success of the VTEC program.

“The results achieved by Fortescue’s VTEC are impressive. With passion and compassion, the VTEC staff at Fortescue are helping indigenous applicants to overcome barriers to indigenous employment such as legal and licensing problems, health and housing. In addition to a guaranteed job at the end of training, the workers get the opportunity to purchase a home through salary sacrifice,” he told The Australian newspaper.

“The lasting impression from the Pilbara, though, was not the numbers, but listening to indigenous trainees and workers. Their backgrounds were the same as other remote indigenous people – schooling that was mediocre at best and various degrees of family and community dysfunction – but the opportunity to get a real, well-paid job and a house had changed the course of their lives.”

FORTESCUE’S LEGENDS
Every year Fortescue Metals Group hosts a dinner in honour of its company “Legends”, employees who are celebrating their fifth and tenth year anniversaries with the Australian iron ore miner.

It’s a celebratory dinner at a glamorous Perth location where everyone is dressed in their finest outfit, and a far cry from how the majority of Fortescue people spend their typical work day: dressed in high-visibility safety gear and helping mine, transport or ship the company’s in-demand iron ore.

At the 2014 dinner, a record number of VTEC graduates celebrated their five year anniversary with the company. Fortescue CEO Nev Power says he is proud of every single employee who reaches the five-year milestone.

“At Fortescue we pride ourselves on our family culture and the Legends Dinner is a fantastic example of that culture,” Mr Power says.

“To see a record number of VTEC graduates celebrating five years of working with Fortescue is testament to their hard work and commitment.

“It is also testament to Fortescue’s longstanding belief that the best way to end Aboriginal disadvantage is by providing opportunity through employment and training.

“The success of VTEC can be measured by the 1100 Aboriginal people working at our operations and the 25 VTEC Legends this year.”

Kerry O’Neil, a Port Hedland resident who works at the Cloudbreak mine, was one of the VTEC legends celebrating five years with Fortescue this year.

“I signed up for VTEC because it was a great opportunity,” Ms O’Neil says. “You didn’t have to start with skills and at the end of it you were guaranteed a job. Now I’m earning good money, working with a good crew and on a good roster.”

Ardagh attributes the commitment that Fortescue inspires in its VTEC graduates to the deep connection between the company and the Traditional Owners on whose land the company operates.

“Fortescue has committed to a program of long-term engagement with these Aboriginal communities, and the support and training we offer does not start and stop with the VTEC program. We run programs that target school retention and participation in primaryschool aged children in remote towns and communities. We’re trying to keep as many of these kids as possible in the education system. We are also working directly with community schools to provide a link between education and vocational training.

“We see this as a win-win situation, Fortescue is future-proofing its Aboriginal employment program by empowering the next generation of skilled workers who choose to embark on a career with us. The other students, who choose a different path, have still received our support through the education system.

LANDMARK AGREEMENT
In November 2014, Fortescue signed a landmark Memorandum of Understanding (MoU) with the Western Australian Department of Corrective Services to extend the VTEC program and provide employment opportunities for Aboriginal prisoners at Roebourne Prison.

As part of the VTEC Fresh Start program, low-risk prisoners will be guaranteed a full-time job after completing vocational training courses that they start while in prison.

Fortescue will provide a training course for prisoners at Pilbara Institute Roebourne campus via a day release scheme. After successfully completing the course and upon release, the students enter a two week, site-based training program and they will be guaranteed a job on graduation.

“At Fortescue we are proud to create opportunities for Aboriginal people by offering a hand up and not a hand out.

“The VTEC Fresh Start program will empower more Aboriginal people to take control of their lives because being employed brings independence, stability and self-belief.”

Desmond Mippy knows better than most people how the lives of these prisoners in Roebourne will change if they’re given a hand up instead of a hand out. His advice to them is simple: “Take this opportunity, grab it with both hands and go all the way with it.”