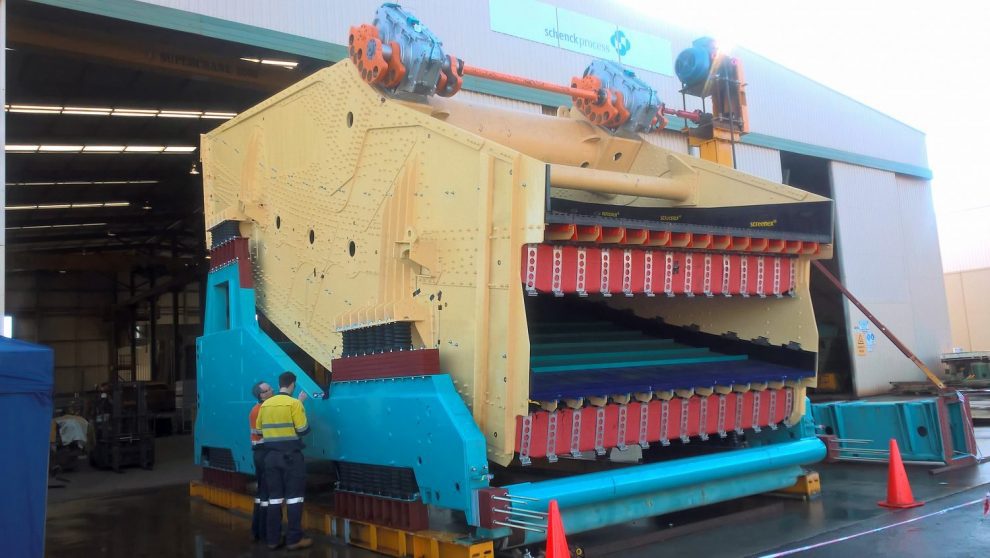 Performance data provided by extra sensors fitted to a prototype vibrating screen is substantially improving the understanding of screen operation.  It is also giving indicators around the overall performance of the processing cycle.

Designed and developed in Australia by Schenck Process, the prototype screen is undergoing site trials.  The company believes this new screen has the potential to change the way vibrating screens are developed and operated.

The standard condition monitoring system comprises two sensor nodes including six degree of freedom MEMS accelerometers, a high-resolution accelerometer and a temperature probe.  On the prototype screen, four additional sensors have been fitted, one on each corner.

“The measurement regime for the additional sensors includes spring amplitude and mean compression, allowing the estimation of tonnage and load bias (to determine if the feed is presented square to the screen or favouring a side) and the determination of spring operating characteristics and cumulative fatigue damage”, said Schenck Process senior R&D engineer Doug Teyhan.

“We are also looking into the development of a predictive failure program to improve overall productivity and efficiency and significantly reduce the possibility of unplanned downtime,” he added.

Historically, failure prediction has been determined by running components to the point of failure and assessing a mean time to failure based on a known operating history.  The data generated by the prototype screen is utilised to estimate the operating stress of the screen at the most aggressive fatigue areas and assessing the cumulative damage of those areas based on the measurement of non-ideal operating characteristics.

Using a Cumulative Damage System which counts machine cycles and also trend characteristics which have the potential to adversely affect vital component life expectation, the plan is to make the machine monitoring system a lead measure in predicting the potential for component failure.

The expanded monitoring system will also provide input into machine development of the next generation of vibrating screens by filling in the unknowns in the design process with real-time field data.

According to Doug Teyhan, the benefits for the customer – including increased availability and improved screen performance – are substantial and have the potential to initiate improvements in the processing cycle.

“And from a screen operation point of view the additional data is bringing to light characteristics not previously known.  It is highlighting transient feed characteristics – not visible using traditional condition monitoring techniques – that impact the loading of the screen and affect machine life expectation,” he said.

“We also believe there are potential industry-wide benefits, through new design parameters and possible changes to machine construction techniques and materials,” he added.

To optimise the greater range and scope of data the screen is generating, the company is collaboratively investigating and assessing other performance variables.  The potential is for control of the variability in the feed rate, more consistent performance and improved overall efficiency of the cycle.