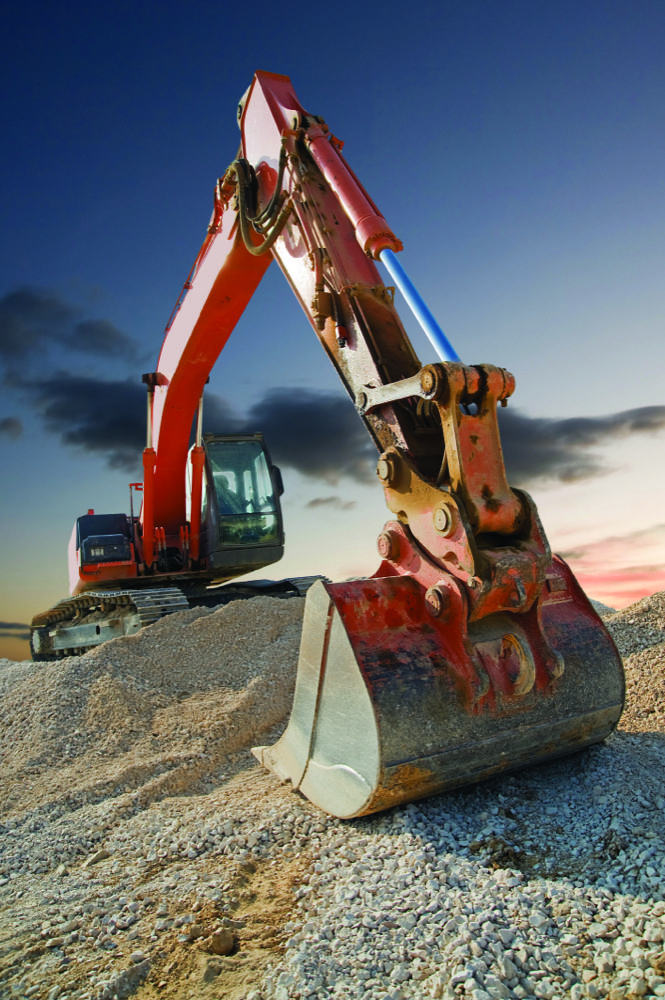 During my two decades working in the hydraulics industry, I’ve been in the fortunate position of being able to observe, and learn from, the mistakes and omissions hydraulics users make when maintaining their equipment.

Based on this long observation, here are the seven most common mistakes hydraulic equipment users make – so you can avoid them!

With thanks to Noria Corporation and Machinery Lubrication Magazine

There are only two conditions that mandate a hydraulic oil change: degradation of the base oil or depletion of the additive package. Because there are so many variables that determine the rate at which oil degrades and additives get used up, changing hydraulic oil based on hours in service, without any reference to the actual condition of the oil, is like shooting in the dark.

Given the current high price of oil, dumping oil which doesn’t need to be changed is the last thing you want to do. On the other hand, if you continue to operate with the base oil degraded or additives depleted, you compromise the service life of every other component in the hydraulic system. The only way to know when the oil needs to be changed is through oil analysis.

A similar situation applies to hydraulic filters. If you change them based on schedule, you’re changing them either too early or too late. If you change them early, before all their dirt-holding capacity is used up, you’re wasting money on unnecessary filter changes. If you change them late, after the filter has gone on bypass, the increase in particles in the oil quietly reduces the service life of every component in the hydraulic system – costing a lot more in the long run.

The solution is to change your filters when all their dirt-holding capacity is used up, but before the bypass valve opens. This requires a mechanism to monitor the restriction to flow (pressure drop) across the filter element and alert you when this point is reached. A clogging indicator is the crudest form of this device. A better solution is continuous monitoring of pressure drop across the filter.

Few equipment owners or operators continue to operate an engine that is overheating.  Unfortunately, the same cannot be said when the hydraulic system gets too hot. But like an engine, the fastest way to destroy hydraulic components, seals, hoses and the oil itself is high-temperature operation.

How hot is too hot for a hydraulic system? It depends mainly on the viscosity and viscosity index (rate of change in viscosity with temperature) of the oil, and the type of hydraulic components in the system.

As the oil’s temperature increases, its viscosity decreases. Therefore, a hydraulic system is operating too hot when it reaches the temperature at which oil viscosity falls below that required for adequate lubrication.

A vane pump requires a higher minimum viscosity than a piston pump, for example. This is why the type of components used in the system also influences its safe maximum operating temperature.

Apart from the issue of adequate lubrication, the importance of which cannot be overstated, operating temperatures above 82 degrees Celsius damage most seal and hose compounds and accelerate degradation of the oil. But for the reasons already explained, a hydraulic system can be running too hot well below this temperature.

Oil viscosity largely determines the maximum and minimum oil temperatures within which the hydraulic system can safely operate. If you use oil with a viscosity that’s too high for the climate in which the machine must operate, the oil won’t flow properly or lubricate adequately during cold start. If you use oil with a viscosity too low for the prevailing climate, it won’t maintain the required minimum viscosity, and therefore adequate lubrication, on the hottest days of the year.

Using the wrong viscosity oil not only results in lubrication damage and premature failure of major components, it also increases power consumption (diesel or electricity) – two things you don’t want.

And despite what you might think, you won’t necessarily get the correct viscosity oil by blindly following the blanket recommendations of the machine manufacturer.

Any filter is a good filter, right? Wrong! There are two hydraulic filter locations that do more harm than good and can rapidly destroy the very components they were installed to protect. These filter locations which should be avoided are the pump inlet and drain lines from the housings of piston pumps and motors.

This contradicts conventional wisdom: that it is necessary to have a strainer on the pump inlet to protect it from “trash”. First, the pump draws its oil from a dedicated reservoir, not a garbage can. Second, if you believe it’s normal or acceptable for trash to get into the hydraulic tank, then you’re probably wasting your time reading this article.

If getting maximum pump life is your primary concern (and it should be), then it’s far more important for the oil to freely and completely fill the pumping chambers during every intake than it is to protect the pump from nuts, bolts and 9/16-inch combination spanners. These pose no danger in a properly designed reservoir, where the pump inlet penetration is a least 2 inches off the bottom.

Research has shown that a restricted intake can reduce the service life of a gear pump by 56 per cent. And, it’s worse for vane and piston pumps because these designs are less able to withstand the vacuum-induced forces caused by a restricted intake. Hydraulic pumps are not designed to ‘suck’.

A different set of problems arises from filters installed on the drain lines of piston pumps and motors, but the result is the same as suction strainers. They can reduce service life and cause catastrophic failures in these high-priced components.

You wouldn’t start an engine without oil in the crankcase – not knowingly, anyway. And yet, I’ve seen the same thing happen to a lot of high-priced hydraulic components.

The fact is, if the right steps aren’t followed during initial start-up, hydraulic components can be seriously damaged. In some cases, they may work OK for a while, but the harm incurred at start-up then dooms them to premature failure.

There are two parts to getting this dilemma right: knowing what to do and remembering to do it. Not knowing what to do is one thing. However if you do know, but forget to do it, that’s soul destroying. You can’t pat yourself on the back for filling the pump housing with clean oil when you forgot to open the intake isolation valve before starting the engine!

7 / Not getting an education in hydraulics

When countries were becoming industrialised in the early 1800s, the need for moving machinery and goods in factories and warehouses grew. It was then that the hydraulic elevator was invented.

The hydraulic elevator used water, a plunger, and valves to raise and lower a platform in a cylinder-shaped shaft. This shaft had to be as deep underground as it was high above ground. Here’s how it worked:

Since these early elevators were raised and lowered on cables made of rope, not too many people cared to risk their lives on them.

It wasn’t until 1853 that a Vermont man, Elisha Graves Otis, designed a platform that moved along two guide rails and was lifted by a windlass, a cable wound around a drum at the top of the shaft. However, it was a safety device in Otis’s elevator that made it a success. That device was a combination of hooks and springs that would stop the elevator if the cable ever broke.

To this day, the company Otis founded has been manufacturing elevators, although they are now powered by electricity rather than steam.

The largest elevator on record was used to raise and lower a swimming pool full of water on the stage of a New York theatre, a weight of 250,000 pounds or the equivalent of 35 hippos!

THE ‘WHO KNEW?’ OF HYDRAULICS

As you might expect, those clever Greeks of antiquity were using sophisticated hydraulics when the rest of the world was still counting with fingers and toes. In 200-ish BC, around the time the Great Wall of China was being built, the Greeks were designing and building machines that used hydraulic power to extract water from the sub terrain and also to disperse water in the world’s first fire engines. A few centuries later in China, inventor Zhang Heng was using hydraulics to rotate an armillary sphere for astronomical observation. The ancient Sri Lankans also discovered the principle of the valve tower or valve pit around this same time.

What’s in a name?

While there’s always some argy-bargy about these things, the modern father of hydraulics is generally accepted to be the 17th Century French scientist, inventor and philosopher, Blaise Pascal. Blaise’s study of hydraulic principles led him to invent the hydraulic press using a hydraulic cylinder to generate a compressive force. Today, more modern versions of Pascal’s hydraulic press are commonly used for forging, molding and metal forming operations. Pascal is also the inventor of the syringe, one of the most important, yet simple uses of hydraulic mechanics in the world today.

Necessity: The mother of invention

A shortage of manpower during World War II brought about the development of the world’s first hydraulic excavator, now used extensively in the mining sector across the globe. An Ohio construction company contracted to build a highway was having a hard time finishing the job due to large numbers of their workforce leaving at the call of Uncle Sam. Two brothers, Ray and Koop Ferwerda, who were partners in the firm, developed a mechanised digger with a triangular boom and a tilt cylinder that allowed the boom to rotate 45 degrees in either direction. This machine could be equipped with either a blade or bucket, and attachment movement was made possible by placing a cylinder at the rear of the boom, powering a long push rod. The first of these machines was installed in 1941 on a government-surplus truck and became the world’s first fully hydraulic excavator.

The Caterpillar 6090 FS mine-site hydraulic shovel (formerly the Bucyrus RH400) is a three-story-high colossus operating in Alberta, Canada. It’s claimed the 6090 can move 9000 tons of earth in 1 hour with the clam-shell design shovel holding up to 94 tons. Two 16 cylinder engines generate 4400 hp, running the 6090 and its 14 hydraulic pumps which hold up to 3400 gallons of fluid — enough to fill a small backyard pool. The tracks each have their own gearbox which are controlled by seven hydraulic pumps per side. The machine is so big it even includes a refrigerator and microwave in a small ‘staff room’ at the back.