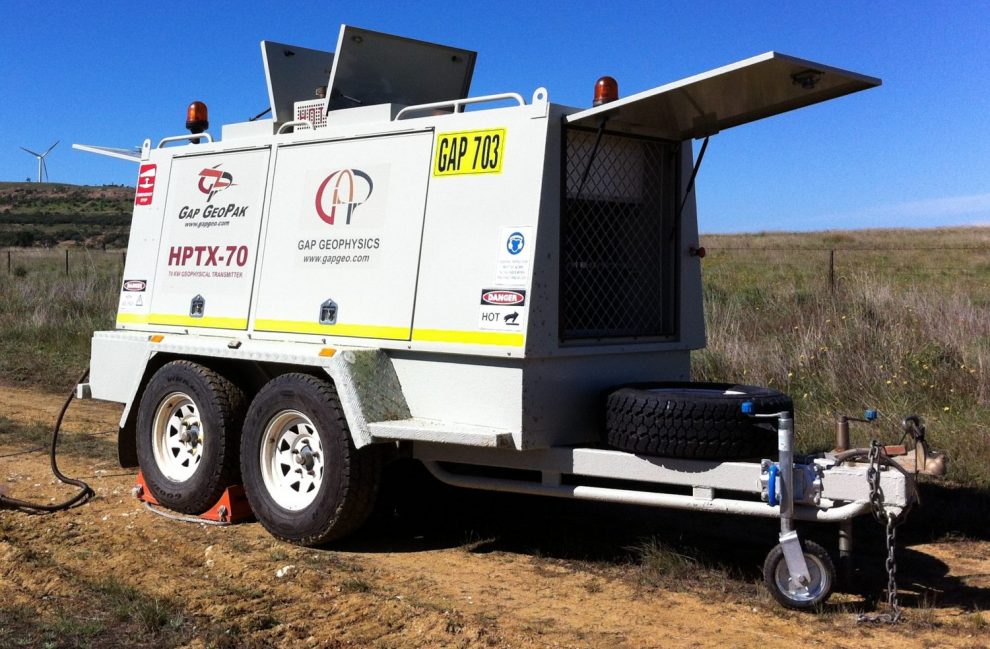 AN idea born as part of a PhD project in 1993 is being met with acclaim 25 years later for GAP Geophysics CEO and Chief Geophysicist, Dr Malcolm Cattach.

Dr Cattach delivered a presentation on his Sub-Audio Magnetics (SAM) and HeliSAM technology at the recent Australasian Exploration Geoscience Conference in Sydney.

Following the event, Dr Cattach and his co-authors were awarded the ‘Laric Hawkins Award’ for geophysical innovation, a peer-voted award, in recognition of the continued development of technology, which is now being considered an industry ‘game changer’.

“This year marks the 25th anniversary of when I introduced the concept of sub-audio magnetics to the exploration industry.” Dr Cattach said.

“In 1993, SAM was a concept ahead of its time, as the sophisticated electronics and computer power required to handle the data volume were not yet available.  In the 1990’s, all we could really do was to prove that the concept was technically and commercially viable using prototype equipment.”

“Although the SAM concept was born in the early nineties, it has taken 25 years to develop and refine the instrumentation, software and survey platforms to the standard that we have today”.

In 2014, GAP Geophysics partnered with Discovery International Geophysics in Canada.  HeliSAM was successfully trialled over the Lalor VMS Deposit in Manitoba where the technique was able to detect the orebody to depths of over one kilometre.

The trial demonstrated that HeliSAM was able to overcome significant obstacles normally presented by the Canadian terrain which makes ground geophysical surveying a challenge as well as very expensive.

“Canada has unique problems in terms of access,” Dr Cattach explained. “There are extensive areas of the country which are very heavily vegetated, and if not, they are often covered in snow or large lakes.”

“When they are doing surveys, it is necessary to lay out large loops or wire, which is tedious enough when you consider the terrain. Surveys are often conducted in winter when the lakes are frozen, so they can get over the lakes.  Where there is forest, they need to cut lines through the trees.  So, the cost to do surveys in Canada, could be double what it is in Australia.”

“During the Lalor trial, we acquired about 100 km of EM in about two hours.   You’d never do that on the ground because it just wouldn’t be cost effective and it would take them weeks of work to acquire anything like that quality of data.”

GAP see the technology having similar results in Australia, as well as overcoming the continued conductive overburden issue that plagues Geophysicists’ domestically.

The Low frequency HeliSAM technology has already shown incredible results following test trials at the Forrestania Test range in Western Australia’s wheatbelt region, showcasing to the Australian market what can now be achieved.

“The LF HeliSAM allows us to gather very high-quality data over large areas very cost effectively, compared to trying to do it at ground level.

“Because we’re exploring to greater depths these days and the cost of drilling deeper is so much more expensive, we really have to think about more cost-effective ways of doing it, otherwise it will just become cost-prohibitive.

“LF HeliSAM is a significant tool for the detection of high-conductance orebodies at significant depth. There’s no other technique quite like this. This is a world first in getting down to those transmit frequencies”.

“Something we’ve always tried to do is to think outside the bounds of conventional approaches and do things a little bit differently. However, it’s often very difficult to get people to accept innovative ideas.  It has been their willingness to try new things which has enabled us to continue development of SAM”.