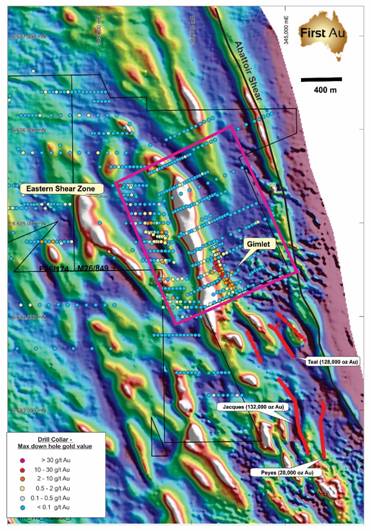 First Au Limited (the “Company” or “First Au”) is pleased to announce the commencement of a 3D Induced Polarization (IP) Survey at the Gimlet gold Project, near Kalgoorlie. IP has been successfully used in exploration within the Yilgarn area and was applied at the Teal Deposit (Horizon Minerals) and within the Binduli mineralised system (e.g. Janet Ivey Deposit) to the south of Gimlet The objective of the survey is to map the Gimlet disseminated sulphide potentially associated gold mineralisation at depths > 200m . The ground geophysical survey area is shown in Figure 1., which includes the Gimlet Resource area and the Horan’s Dam Prospect.

The desired outcome would be –

First Au has recently expanded its footprint in the Kalgoorlie region with a recent tenement application located close to First Au’s White Flag Tenement E 24/215 (Figure 2. And 3.). Tenement Application E 16/542 (area of 9km2 ) is dominated by clastic sandstones and conglomerates of the Archean Kurrwang Formation. The contact between the underlying Black Flag Group and these overlying late basin sediments hosts several deposits in the Kalgoorlie Terrane, including the Invisible Deposit at St Ives, Kambalda. Tenement Application E 16/542 also runs parallel to the Zuleika shear zone, which contains the Kundana Gold camp of Northern Star Resources.