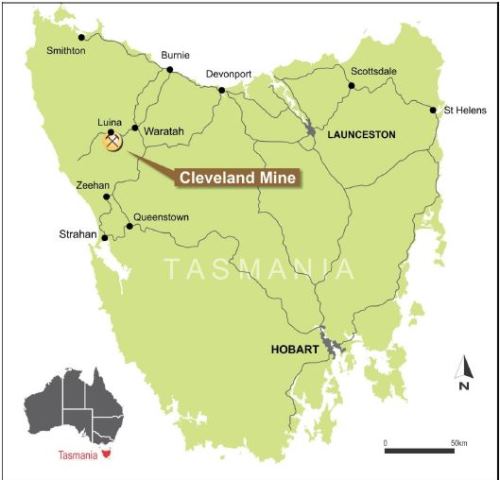 Elementos Limited announced the results of the first five holes drilled at the Cleveland Project in northwest Tasmania.

Two significant intersections from the program include:

The Company is very encouraged by the results of Holes C2102 and C2104 which have the potential to extend the open–cut mineral resource at two of the main tin-copper lode systems defined at Cleveland. The intersections and transition zones have a strong presence of disseminated to semi-massive sulphide mineralisation including pyrrhotite, pyrite, marmatite and chalcopyrite (primary copper mineralisation).

The objectives of the diamond drilling program, which commenced in August is two-fold:

The recent exploration activities which include mapping, sampling, geophysics and drilling are the first modern exploration activities undertaken at Cleveland since 1986. The Company is now establishing a more comprehensive understanding of the geology and mineralisation at Cleveland which it believes will assist with better target generation for the on-going drilling program.

Chris Creagh, CEO of Elementos, said “The initial drill results received are an encouraging start to the program, highlighting the potential for an incremental increase in the existing open-cut resources at Cleveland

“A total of 16 drill holes are planned targeting infill and extension mineralisation around the existing open-cut resources. An additional 12 drill holes have been planned to test the magnetic anomalies that were detected earlier this year, with drill site access and pad preparations underway”.