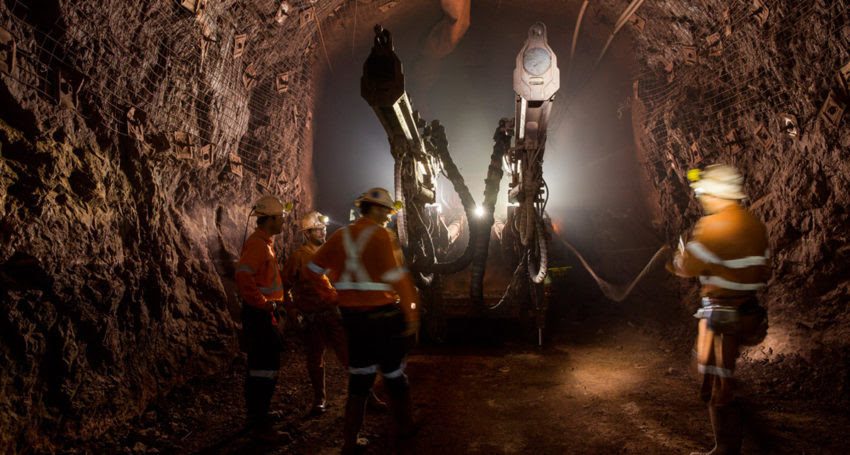 South Australia’s mining sector is well placed to play a crucial role in helping the state’s economy off the floor at the conclusion of the COVID-19 crisis.

According to figures from the South Australian Chamber of Mining and Energy, royalties paid to the state government are projected to reach $325 million for the 19/20 financial year, up from $299 million the previous financial year and $207 million in 2015/16.

Jobs in the sector have also grown to reach 27,200 direct and non-direct employees this year and have been boosted in recent times by more than 1000 direct construction and production jobs at Oz Minerals’ new Carrapateena copper/gold mine 160km north of Port Augusta.

While global commodity prices, which are calculated in US dollars, have dipped in the past two months, this has been largely offset locally by a slump in the value of the Australian dollar to some of the lowest levels in almost two decades.

A global survey of 2400 explorers, developers and other mining-related companies was released in February and listed South Australia as the 6th most attractive jurisdiction in the world for mining investment, up from 24th in 2018.

The Fraser Institute Survey of Mining Companies 2019 ranking for South Australia was the first time the state had been recognised in the top 10 since 2015, when it was ranked 10th of 109 jurisdictions. In the 2019 survey, Western Australia was ranked No. 1 ahead of Finland and Nevada.

While market caps have reduced in the past couple of months as stock markets around the world suffer through the coronavirus crisis, the pandemic is yet to significantly slow production at South Australia’s major mines.

In 2019, the state produced about $4.5 billion worth of minerals, led by copper, which accounted for about 50 per cent of the value, followed by gold and iron ore. South Australia is also a major producer of uranium, hosting four of the six approved uranium mines in Australia, which generated more than $500 million in revenue last year.

PwC partner Andrew Forman said the rise in royalties in recent years was a result of increases in both production and sale prices.

“What we’ve seen in the last few years in South Australia is both of those things – increases in production and also steady increase in commodity prices, which have pulled back a little bit in recent weeks but by and large we’re still in a pretty reasonable position and that position has improved,” he said.

“Whilst commodity prices have come down a little in recent months from a reasonably good level, I suspect that has largely been cushioned by the decrease in the Australian dollar over the same period.”

Forman said although the mining gains of the past few years could not be classified as a boom, the degree of caution around investments showed the memories of the tough times following the last mining boom were still fresh in the minds of many in the industry.

He said although times were uncertain at the moment there was still potential for further growth in this mining cycle.

“I would have said that we are still moving in a positive direction towards a peak and in my experience we are not at a position where we are seeing irrational or over exuberant investments.

“This build up feels like it has been a bit more rational and structured than where we got to in the 2006 to 2010 period when commodity prices reached high levels and we invested in some projects we shouldn’t have as an industry.

“The hope or the plan is that mining companies, like all companies will have to bunker down a little bit during this period because we are in a period of lower confidence and we are in a period where prices will come off a little bit but we certainly hope that is only temporary and at some point in the future we’ll move back to the position we were in a few months ago, which is a position where the industry is poised for significant growth including within South Australia.”

The South Australian government launched its Copper Strategy in February 2016, which aims to triple the state’s copper production to 1 million tonnes per year within two decades.

The state government announced last week it would defer costs linked to exploration and licence fees for the minerals and petroleum sectors to alleviate the impact on industry of coronavirus containment measures. In addition, there is a 12-month waiver of committed expenditure for all mineral exploration licence holders.

The state has also recently completed the Gawler Craton Airborne Survey, which captured approximately 1,800,000 line kilometres of data over an area of about 324,000sq km – the size of Norway – and is the largest survey of its kind to be done in Australia and possibly the world.

The survey aims to help explorers discover new deposits in the region, which is already home to large-scale copper/gold mines Olympic Dam, Prominent Hill and Carrapateena.

BHP also announced in November 2018 it had made a huge copper/gold discovery at Oak Dam West, 65km south of its Olympic Dam operation.

Forman said the government’s focus on copper was justified but significant new projects would need to commence if it was to go anywhere near achieving its copper target.

“We have some very large copper deposits being mined at present and we have a large state by area and there’s a lot of prospectivity in relation to copper,” he said.

“By virtue of those facts it is a strategy that makes a lot of sense but I think we would need to discover and develop new deposits in order to be trending towards that sort of target.

“Generally we are underweight and the opportunities are good so we are well positioned for some large new mining projects.”

The South Australian Chamber of Mining and Energy has been the industry’s peak body in the state for the past 40 years.

SACOME CEO Rebecca Knol said the resources sector now contributed 50 per cent of the state’s exports and its workforce was “growing at pace”.

She said the recent high ranking in the Fraser Institute Survey had allowed the state’s mining industry to start the decade on a high note.

“In addition, the resources sector is expected to provide $325million in royalties to the State Government in the coming year – cash to contribute to the building of roads, schools and hospitals.”

As many industries struggle through COVID-19, mining in South Australia has so far proven resilient.

Knol said the resources sector had been defined as an essential service and was taking steps to protect workers and communities from the spread of COVID-19 by implementing measures such as health monitoring, regular cleaning, physical distancing, travel limits and shift changes.

“Our sector is continuing to generate revenue for the state thereby contributing financially to the economic stimulus packages provided by the Marshall Government to businesses and workers affected by the restrictions,” she said.

“This revenue stream is critically important for the state during the crisis and will remain so throughout recovery and beyond.

“With a proven track record of adaptability and resilience in difficult times, the resources sector is dynamic and innovative, it embraces change and it leads the way. It will be key to South Australia’s economic recovery.”

BHP, which operates the state’s largest mine Olympic Dam, is employing an additional 1500 people across Australia for the next six months to help it maintain production through the pandemic.

The company charters more than 40 flights from Adelaide Airport every week to transport thousands of its workers to Roxby Downs near Olympic Dam.

Late last month it adopted new body temperature screening procedures at Adelaide Airport to screen its passengers before boarding. Under the new protocols, passengers recording 38C or above on a thermal camera will be asked to take a secondary test using a thermometer. Anyone still recording an elevated temperature will not be permitted to board the flight until they obtain a medical certificate saying they are fit to fly.

In a statement to the ASX last week, Oz Minerals announced it had so far not experienced any production impacts as a result of the virus at its two South Australian mines, Prominent Hill and Carrapateena.

The company is also increasing its ore stockpiles to safeguard production against any worsening of conditions.

Oz Minerals chief executive Andre Cole said with more than 85 per cent of the Australian sites’ workforce based in South Australia, the state’s border closure would have limited impact on the continued operation of Carrapateena and Prominent Hill.

In its statement the company also said the A$ copper price had proved resilient against a deteriorating US$ spot price, and with the vast majority of the core Australian operations’ cost base being A$ sourced, the lower A$ has provided an effective hedge against US$ based revenues.

It said demand for copper intensive items such as air conditioners and cars has begun to improve in China in recent weeks, whilst the broader market has also been impacted by the temporary reduction in copper concentrate supply from major producing countries in South America and Africa.