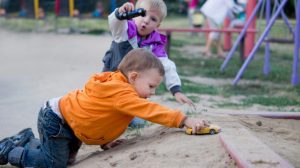 One in five children aged under five in Broken Hill have blood lead levels above the current national goal of ten micrograms per decilitre (g/dL), according to a new report released today by The Lead Group.

The research, published in the journal, Environmental Research, reportedly shows children are exposed to contaminants in play areas.

Professor of Environmental Science at Macquarie University, Mark Patrick Taylor, said the findings of the report were worrying.

“We measured the amount of metal-rich dust that could be picked up on the hands of children at public playgrounds in Broken Hill. We found that, on average, the amount of lead on hands after ten minutes play was 72 times the amount on hands before contact with play equipment,” the Professor Patrick Taylor said.

To pre-empt claims children are ingesting historical sources of lead, such as leaded gasoline and paint residue, researchers used lead isotopic analysis to show the most likely source of contamination is from the lead ore body that is still being mined.

Although there is no Australian standard specifically for lead on hands, the Western Australian government set a goal in 2007, for the clean-up standards in Esperance, that outdoor surfaces accessible to children should not exceed 400 ?g/m2.

“Our study found that, after playing at one particular playground, a child’s hand could have the equivalent loading of 60,900 ?g/m2 – more than 150 times the goal set in WA and significantly higher than levels recorded in the smelter city of Port Pirie,” Professor Patrick Taylor said.

“Soils in playgrounds also had elevated lead. The National Environmental Protection Measure (2013) sets a soil lead standard of 600 mg/kg for recreational spaces. Three of the six playgrounds we tested exceeded this standard and four exceeded the lower residential standard of 300 mg/kg, which may be a more appropriate standard as it also applies to daycare centres.”

“Of the other metals we analysed (arsenic, cadmium, silver and zinc), no soil samples exceeded the relevant Australian guidelines. However, it is worth noting that Australian standards for soil metal are more liberal than our international counterparts.”

“Our data, combined with data collected by mining companies as part of their environmental monitoring, show that surfaces in Broken Hill are recontaminated daily. And they indicate that contemporary mining activities are the most likely consistent source of airborne lead and other metal-rich particles.”

“Although the bulk of mining today occurs underground, ore is processed at the surface and can generate large amounts of dust. It is unlikely to be a coincidence that the most impacted playground we measured was located at Zinc Lakes, less than 400 metres from an active ore processing facility.”