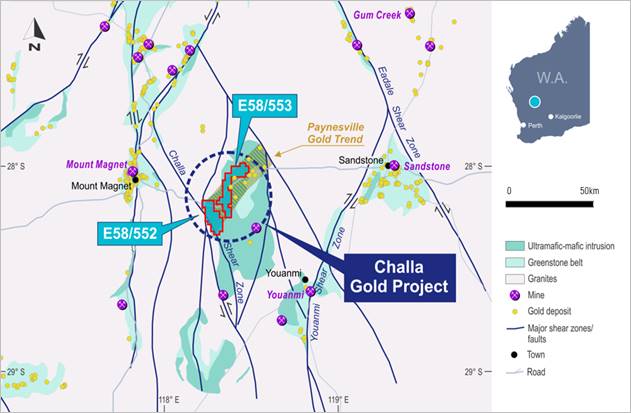 Platina Resources Limited has entered into a conditional agreement to acquire a 100% interest in the Challa Gold Project located in-between the prolific Mt Magnet and Sandstone gold districts in Western Australia, 500km north-east of Perth.

Platina Managing Director Corey Nolan said he was excited to gain exposure to a world-class gold province at a very low entry cost.

“The Yilgarn Craton of Western Australia has been a prodigious gold producing province since the 19th century and home to many successful mining operations,” Mr Nolan said.

“Challa lies within an area defined by more than 50 gold occurrences, on a previously unrecognised gold trend, the Paynesville Gold Trend, which intersects and interacts with the Challa Shear, a classic Yilgarn Craton structural setting for plus million ounce gold deposits.

He said that the tenements had not been the subject of any recent or modern exploration activities but that was about to change.

“Once the tenements are granted, Platina can quickly mobilise on site via an all-weather access road, and commence field activities which includes a low-cost Rotary Air Blast (RAB) drilling program to identify primary targets,” he said.

“A reconnaissance site visit to the northern end of the project area identified outcropping quartz veins that assayed 5.1 and 6.8 g/t gold from the rare basement geology exposed at surface. This vein trends to the north-west and disappears under thin transported cover.”