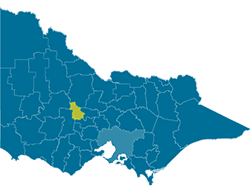 Victoria’s next gold boom is underway in Fosterville, extending two centuries of gold mining in the Central Gold Fields area.

Minister for Resources Tim Pallas joined the Member for Bendigo East Minister Jacinta Allan today at Fosterville Gold Mine – touring the facility and getting an update on recent developments.

This follows new mineral exploration drilling gold results at the mine, which employs 445 people – eight out of 10 which live in the Greater Bendigo region.

Fosterville’s success is a boon for local employment, the local supply chain and local businesses and is resonating around the world, with international investors examining Victoria’s gold field potential with fresh enthusiasm.

At the recent Prospectors and Developers Association of Canada’s annual convention in Toronto – the world’s largest international mining and mineral exploration conference – the Geological Survey of Victoria was recipient to encouraging investment queries about Victoria’s “Golden Triangle” of gold prospectivity.

Based on its latest reported reserves, Fosterville is a world class gold mine for ASX-listed Kirkland Lake Gold and extends the two centuries of gold mining heritage in the Central Gold Fields area.

The advanced geoscience work of Geological Survey of Victoria has identified that the area around Bendigo and Fosterville could hold up to 32 million ounces of gold – that’s gold out there still to be found.

The Andrews Labor Government is supporting industry to boost jobs and maximise the return to Victorians.

Minerals exploration assistance for metals, such as gold and copper, through the $15 million TARGET mineral exploration grant program provides co-funding for eligible mineral exploration activities. More than $3.4 million has already been awarded to support 15 projects in the Stavely and Northern Bendigo geological provinces.