Home » Latest News » Boom? What Boom? Can we call it that yet? 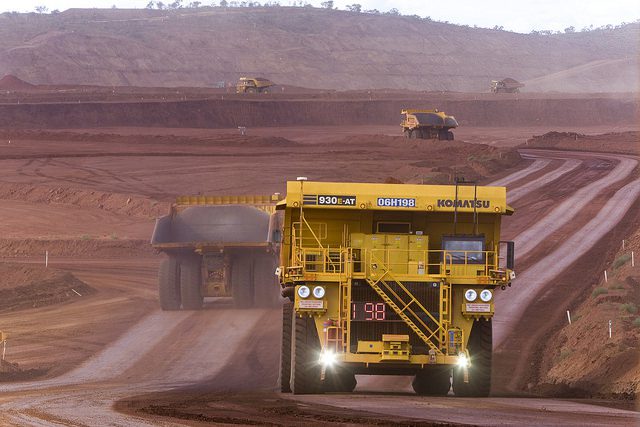 Rio Tinto has confirmed it will spend $3.5 billion developing the Koodaideri iron ore mine near Newman, in what is set to become the most technologically advanced iron ore mine in the world. It is expected to create more than 2,000 jobs during construction and 600 ongoing production roles.

W.A. Premier Mark McGowan has welcomed the decision by Rio Tinto. Commencing in 2019 subject to government and environmental approvals, the project is expected to create more than 2,000 jobs during the construction phase and a further 600 ongoing jobs once operational.

WA has a skilled workforce and a large array of suppliers of various goods and services, both in the Pilbara and across the State, who can contribute to this important project.

The McGowan Labor Government is committed to creating and securing jobs for Western Australians, and will continue to work with Rio Tinto to maximise opportunities for more local content and local businesses.

“I congratulate Rio Tinto on investing in this Pilbara project and for having a strong focus on employing WA workers and WA businesses.

“With more than 2,000 construction jobs expected to be created and a further 600 ongoing jobs once the project is operational, this is a big boost for the WA economy and welcome news for WA workers.

“My Government is committed to implementing our Plan for Jobs and diversifying the economy.”

Earlier this year, BHP announced it would construct its $4.7 billion South Flank mine in WA’s central Pilbara and Fortescue Metals Group approved the development of its $1.7 billion Eliwana mine.

There have also been significant investments in the development of lithium mines across the state on the back of growing demand for battery storage devices, along with other dysprosium and other mineral projects.

The large spending comes after a slump in mining investment in the state over the past five years.

In a media release from Rio Tinto, it explains that Koodaideri will deliver a new production hub for Rio Tinto’s world-class iron ore business in the Pilbara, incorporating a processing plant and infrastructure including a 166-kilometre rail line connecting the mine to the existing network. Construction will start next year with first production expected in late 2021. Once complete, the mine will have an annual capacity of 43 million tonnes, underpinning production of the Pilbara Blend, Rio Tinto’s flagship iron ore product.

Koodaideri Phase 1 will help sustain Rio Tinto’s existing production capacity by replacing depletion elsewhere in the system. The project will increase the higher-value lump component of the Pilbara Blend, subject to market conditions, from the current average of about 35 per cent to around 38 per cent. It is expected to deliver an internal rate of return of 20 per cent2and capital intensity of around $60 per tonne of annual capacity, highly competitive for a new mine considering the additional infrastructure of rail spur, airport, camp and road access required.

The operation has been designed to utilise an increased level of automation and digitisation, helping to deliver a safer and more productive mine which is expected to be Rio Tinto’s lowest cost contributor to its industry benchmark Pilbara Blend product. Through the use of digital assets, advanced data analytics and automation, Rio Tinto expects to significantly enhance the operation and maintenance of this new mine.

Rio Tinto chief executive J-S Jacques said “Koodaideri is a game-changer for Rio Tinto. It will be the most technologically advanced mine we have ever built and sets a new benchmark for the industry in terms of the adoption of automation and the use of data to enhance safety and productivity.

“As we pursue our value over volume approach, targeted high quality investments such as Koodaideri will ensure we continue to deliver value for our shareholders and Australians.

“This further investment in our iron ore business is also a multi-billion dollar vote of confidence in Western Australia. The project will also deliver significant opportunities for local companies and we expect more than A$3 billion will be spent with Australian-based businesses, with opportunities for about A$2.5 billion of spending for Western Australian-based businesses during its development.”

The investment is underpinned by an ore body3 of high-quality Brockman ore more than 20 kilometres long and three kilometres wide. In addition to mine infrastructure, an airport, mine support facilities and accommodation for employees will be built. Throughout the construction period Rio Tinto expects to employ over 2,000 people with 600 permanent roles created once the mine is operational.

Since completion of the pre-feasibility study in 2016, additional capital has been included for productivity enhancements to increase capacity to 43 million tonnes from the 40 million tonne base case. The project scope was also broadened to incorporate significant safety improvements and the development of additional infrastructure such as an airport and site access roads. Cost inflation for labour and materials also contributed to the capital increase.

A $44 million pre-feasibility study into Koodaideri Phase 2 has also been approved. The expansion could increase annual capacity from the Koodaideri production hub to 70 million tonnes and beyond. A final investment decision is subject to study outcomes and Rio Tinto’s value over volume approach.

So is this the start of another mining boom? Kathryn Diss from ABC News explaines in detail here.